The Town of Jackson is reinstalling the bike lanes on Snow King Avenue this week.

The protected bike lanes, which feature additional striping and flexible plastic delineators to offset the bike lane from motor vehicle traffic, are intended to improve safety for people on bikes along Snow King Ave., which is the primary bicycle route connection in town.

Last week, paint crews repainted lane stripes throughout most of town and will be marking intersections and crosswalks for the next several weeks as weather permits. The bollards, highly popular with cyclists and especially parents of younger kids on bikes though perhaps less popular among motorists, will be re-installed this week, likely starting Tuesday, June 11.

Counts showed that bicycle trips on Snow King increased 18% over 2017 and that there was a 12% increase in automobile speed limit compliance. Feedback from cyclists indicated a significant improvement in comfort and safety of traveling on Snow King and a significant decrease in the risk posed by distracted drivers.

“The bike lanes make it possible for us to feel safe and avoid walking our bikes so much,” one cyclist wrote to the town council in April. 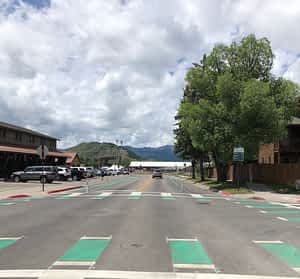 Earlier this year, the Town Council approved extending the protected lanes two blocks from Millward to Cache Street. This extension will provide a safe connection for people on bikes to be able to travel to events and destinations at the base of Snow King, such as the weekly People’s Market, Snow King resort, and Phil Baux Park. The new section from Millward to Cache will have a similar layout to the existing segments but will test out slightly wider vehicle lanes of 11’ with 5’ wide bike lanes. Travel lanes on the existing segment west of Millward were a consistent 10’ wide, with the bike lanes generally ranging from 4’ to 7’ wide depending on the remaining space to the curb line.

The Town of Jackson will study this new segment to evaluate if the slightly wider vehicle travel lane might improve future layouts. Town of Jackson staff noted that the new bollards will be located approximately the same distance from the edge of the curb as a parked car, so if drivers have been able to drive down Snow King without colliding with parked cars, then they should also be able to avoid the bollards.

Additionally, Town staff has continued to work with START Bus, law enforcement, Public Works maintenance personnel, and emergency responders to make adjustments to the bollards on the existing section to improve operations. In several sections, bollards were removed to accommodate turning movements for larger vehicles, and this year, several sections of bollards have been moved out slightly to allow for more room, notably on curved sections and at selected intersections.

Snow King Avenue is the most highly traveled bike route in the Town of Jackson, particularly as a corridor for kids riding to school and adults commuting to work. The Town of Jackson is strongly committed to providing safe mobility options for residents and visitors, and the Town recognizes that a functional, equitable transportation system that meets the needs of all users must be comprised of safe facilities that enable people of all ages and abilities to walk, bike, ride transit, or drive safely and comfortably through their community.