JACKSON, Wyo. — Considering the intimidating travel conditions that are generally looming during a Wyoming winter, it’s a testament to the hardy nature of touring acts that trek here to perform out of their natural habitat. And our local scene is stronger than ever. Grab your calendar and make the most of this short window of cultural offerings. Here’s a snapshot, a winter music taster of show offerings.

The Knotty Pine Supper Club in Victor has one of the most enticing club lineups of the batch. The Silent Disco craze is happening, and Dec. 20 will feature this concept of choosing your own DJ channel (in your personal headphones) from a selection of live DJs.  Other highlights in the calendar include soulman Josh Hoyer & Soul Colossal (Dec. 31), Batdorf & Brother Wolf (Jan. 24), local funksters Sneaky Pete & The Secret Weapons (Jan. 31, Feb. 1), Boombox with Ethno (Feb. 7), afrobeat big band Antibalas (Feb. 26), Cajongrass purveyors (March 14-15), Galactic featuring Anjelika Jelly Joseph (March 18), and jamband Spafford with Yak Attack (March 19). KnottyPineSupperClub.com.

In downtown Jackson, the music scene is a barhopping extravaganza concentrated towards the Silver Dollar Showroom, Million Dollar Cowboy Bar, and the Pink Garter Theatre/The Rose. The Pink Garter just announced a two-night New Year’s Eve run with The New Orleans Suspects (Dec. 30-31), an all-star group of Crescent City musicians paying tribute to Dr. John. Other shows include Andrew Munz’s one-man comedy “I Don’t Ski” (Dec. 27-28), the return of The Motet (Jan 18-19), Tribal Seeds with The Expanders (Feb. 13), Fruition with TK & The Holy Know Nothings (April 2), Citizen Cope (May 24), and most Thursdays feature Salsa and Bachata dancing in the lobby of The Rose. PinkGarterTheatre.com. 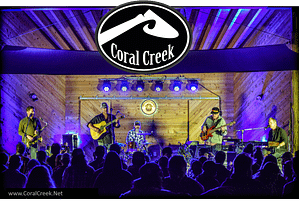 The Silver Dollar Showroom in the Wort Hotel will continue the long-standing tradition of Bluegrass Tuesdays with One Ton Pig (including New Year’s Eve and Fat Tuesday, Feb. 25) as well as every other Thursday with classic covers from Tasha and the Good Fellows. Music offerings are generally free, 7:30 to 11 p.m. on Tuesdays, Thursdays, Fridays and Saturdays. Some highlights from the winter calendar include “Colo-Caribbean Newgrazz” band Coral Creek (Dec. 13-14, Feb. 7-8), up-and-coming twang rockers Strumbucket (Jan. 3), Cali rock band Boot Juice (Jan. 4), Aaron Davis & the Mystery Machine (Jan. 17-18), Banshee Tree (Jan. 24-25), Pixie & the Partygrass Boys (Jan. 31, Feb. 1), Tylor & the Train Robbers (Feb. 21-22), and a special “Showroom Session” to be announced for March 19. WortHotel.com.