JACKSON, Wyo. — The weather pattern is set to turn cooler and more unsettled over the weekend. However, this will only be an appetizer for a powerful storm that will produce strong winds and significant precipitation over the West Coast before reaching Jackson Hole on Monday.

In recent years, Northern California has experienced devastating wildfires in late October and early November due to offshore (east to west) wind events combined with bone dry weather. However, this upcoming storm will put an emphatic end to fire season in Northern California and we will see downstream impacts in Teton County as well.

An extensive plume of subtropical Pacific moisture known as an Atmospheric River will reach California on Sunday before spreading northeast into the Rockies on Monday. In skier-lingo, atmospheric rivers are also known more informally as a “Pineapple Express” due to the fact that the origin of moisture is often in the vicinity of Hawaii.

This atmospheric river event will be particularly impressive with precipitable water values (a measure of water vapor in the atmosphere) ranging from 250-400% of average.

In addition, the approaching storm will feature extremely low pressure before it makes landfall on the Pacific Coast. According to University of Washington meteorology professor and researcher, Cliff Mass, this storm could set a record for the lowest pressure off of the Pacific Northwest Coast.

The strength of this storm combined with the amount of moisture in the atmosphere will result in a substantial rain, snow and wind event from California to British Columbia with the heaviest precipitation (including feet of snow at the higher elevations) expected over California’s Sierra Nevada Range

What does this mean for Jackson Hole’s weather? While we won’t see the insane rain and snow totals that the West Coast states are expecting, we will still see significant local impacts in Teton County.

A weak storm system and a cold front will arrive on Saturday morning, putting an end to mild conditions experienced in prior days. A few light showers could arrive late Friday night/early Saturday morning with snow levels initially starting out around 7,000-8,000 feet.

Showers will then pick up in coverage on Saturday morning and Saturday afternoon and continue off-and-on through Sunday morning. Snow levels behind the cold front will generally range from 6,000-7,500 feet during the day on Saturday, meaning we will see snow falling on the valley floor at times.

Lingering snow showers will taper off by later Sunday morning with a break in the action expected on Sunday afternoon with perhaps even a few breaks in the clouds. Warmer air will arrive from the south in advance of Monday’s storm and winds will also pick up out of the south on Sunday afternoon.

On Sunday night, showers will arrive in advance of the storm with snow levels rising to 9,000-10,000 feet. Confidence is low in how light or heavy Sunday night’s precipitation will be, but odds are that it will be on the lighter side with the heavier precipitation holding off until Monday.

A strong storm will arrive on Monday with heavy precipitation and gusty south/southwest winds expected for most of the day and into the night. The main question mark right now is when the cold front will arrive, which could happen as early as Monday morning or as late as Monday evening.

The timing of the storm system will also influence when exactly the heavy precipitation arrives, which right now looks like it could be as early as Monday morning.

Ahead of the cold front, snow levels will range from 9,000-10,000 feet and freezing levels could peak as high as 11,000 feet. The relatively intense warm surge from the south out ahead of this storm is actually a sign of how strong the system is.

Behind the front, snow levels will drop and eventually reach the valley floor on Monday night and Tuesday morning.

Depending on the timing of the cold front, a snowy Monday evening commute is possible over Teton Pass, while Tuesday morning’s commute over the pass could be impacted significantly with snow-packed and icy roads likely. Roads in Yellowstone are also likely to be impacted on Tuesday especially, but possibly as early as Monday evening.

A potent secondary disturbance will also arrive from the west on Tuesday, which should keep snow showers going through much of the day and into Tuesday night with snow levels on the valley floor. Gusty west/southwest winds are expected in the mountains on Tuesday as well, with winds out of the southwest in the valley.

Snow shower activity could persist through much of Wednesday as well with snow levels remaining on the valley floor. Keep in mind that valley temperatures will rise well above freezing on both Tuesday and Wednesday, so any snow that does accumulate in the lower valley around the Town of Jackson will melt off fairly quickly, especially on the roads.

Liquid-equivalent precipitation totals from Saturday through Tuesday will range from 2-3 inches over the Tetons and 0.75-1.5 inches over the Jackson Hole Valley. Yellowstone will see similar amounts with lesser amounts farther south over the Salt River and Wind River Ranges.

Snow totals on Monday-Tuesday are uncertain at this time and will be dependent on the timing of heavier precipitation with falling snow levels – i.e. how much precipitation falls as snow versus rain at various elevations. However, double digit snow totals above 8,000-9,000 feet are a good possibility. This snow will be on the wetter/denser side.

Check out the map below of projected precipitation through Tuesday night over the Northwest and Northern Rockies to get an idea of the regional distribution and how Teton County fits in. Notice the huge amounts projected over the West Coast, including Northern California where localized 10-inch precipitation totals are a possibility. 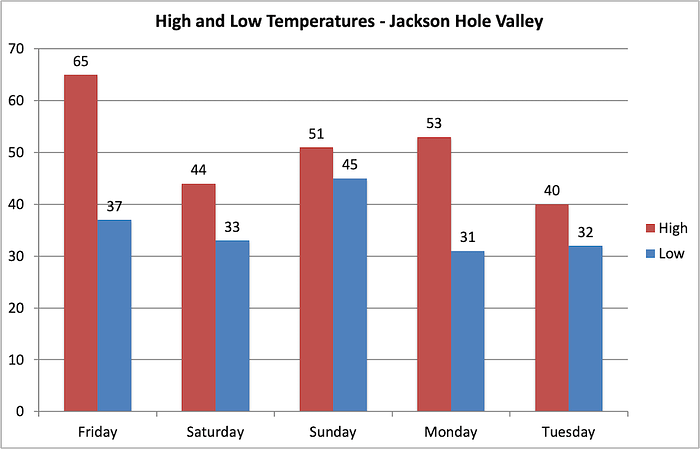 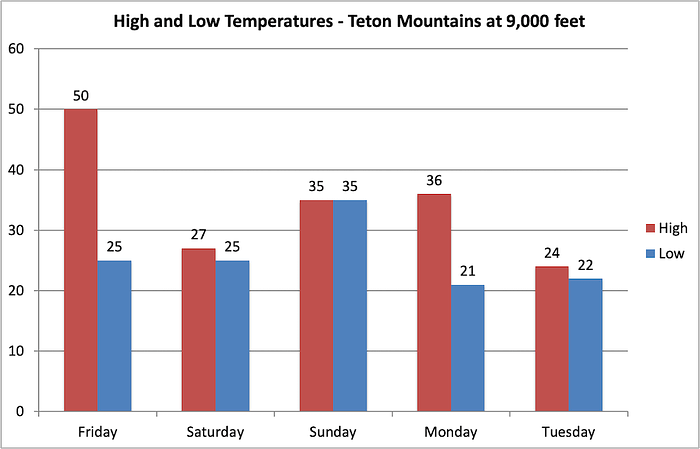 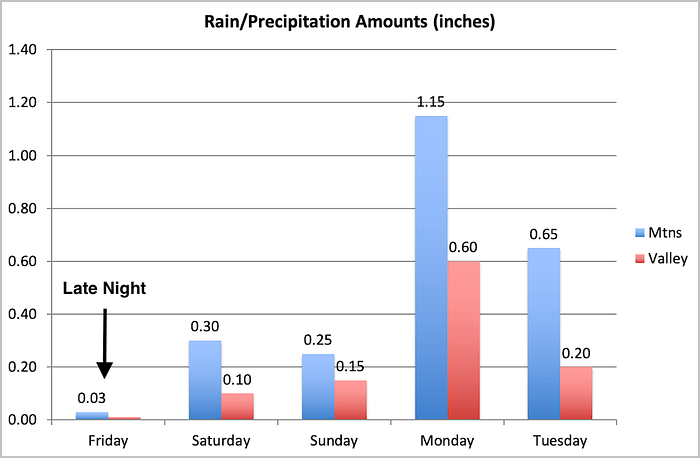